Have anyone done any work using L&L and Search and Filter Pro ?

I have been exploring the solution using their custom display method Custom - Search & Filter Pro (searchandfilter.com) but ended up getting stuck.

I reached out to the support team and they told me I would need a way to add a wp_query argument to L&L argument? A little lost now

Any thoughts on this guys?

Thanks you so much in advance.

I looked in Search & Filter Pro’s documentation, and I think it’s possible to use their “Filter Next Query” shortcode.

It should set the default query to the search results, which can be looped like this:

I had the chance to try the Filter Next Query short code as you suggested, but for some reason it doesn’t show the search results form nor any loop results when I add the short code above the loop as seen below.

I reached out to the developer and he communicated the following text in italic to me:

In our form the display results method would need to be set to Custom (as you should already have done), and then you need a way to add a wp_query argument to their argument. This would be that argument (they will understand this): ‘search_filter_id’ => 25802,

I suppose this would make more sense to you. Would you like to have access to an environment where we can try to figure out an integration for L&L and S&F Pro? If so, I am willing to hook you up with that on my end. Just let me know.

I’m not sure if this applies, but this sounds very similar to getting L&L to work with FacetWP:

Necessary ingredients to make FacetWP recognize your Loop Use facetwp-template as the wrapper class for your loop. When the page loads, FacetWP uses JavaScript

Hi Kendell, thank you for the info.

Could you try with just <Loop>, without specifying type? That should get the “default query” which their shortcode is meant to set.

If that doesn’t work, I’ll look into providing a way to set any arbitrary wp_query argument, including search_filter_id. That would be a nice general-purpose solution.

Hi Gabriel - You’re right, FacetWP integration looks like it works the same way. I see the example uses <Loop> to get the default query modified by an external plugin.

In implementing your last solution, I notice that only the title of the page is displayed and not the list of blog posts specified in the general settings. 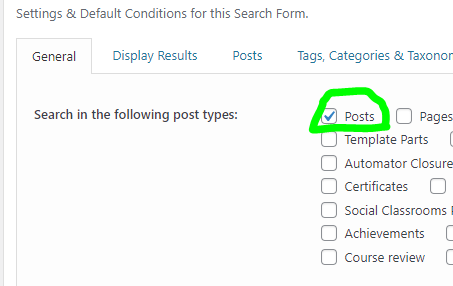 Not sure what the final solution will look like, but I am wondering: Without specifying the type or other query arguments within the loop code, do you think the solution will allow us to create filters that might be dependent on a pro addon, for example LearnDash? Let’s say I want to filter courses based on the access_type or completion_status? Or is that out of the scope?

@Tangibleinc I had a look at the FacetWP, but I wasn’t sure exactly which parts might need the tweaking for S&F pro.

Just circling back on this. By any chance were you able to have a re-look at this? Do you envision this as something a bit difficult to achieve with S&FP’s current setup?

Hey Kendell, it’s been a while since this request but I wanted to follow up here to let you know that it’s now possible to define custom query parameters using the (intuitively named) custom_query parameter. I used your Search and Filter example from this thread in my write-up about the update so you can check out that post here. Let me know if you have any questions about this!

Thanks for the note!

Super exciting stuff. Thank you all!!!

Can’t wait to give it a go as soon as I get my license sorted again. I’ll be sure to let you guys know how it goes!

I had the chance to give this a try, and I must say it’s super simple to setup and knocks off another plugin

To finish the setup, I created a number control that accepts the ID of the search and filter form, which is then passed to the loop. Works fine!

I had a little issue with the Ajax loading/pagination though. (See screenshot for setup)

I created an ID (main-cards) above all the html in the block for the “scroll window to:” feature in the plugin. I then used the class “tangible-paginator-target” for their “Ajax Container”. The results load fine with the Ajax turned on.

However the issue is with the pagination. I used the class “tangible-paginator-button” as the “Pagination Selector” in an attempt to have the pagination work with the Ajax loading, but it doesn’t seem to work. I got this class from the tangible pagination buttons.

So my final finding with the pagination setup is that the first page of posts will load just fine. But upon performing a search and filter, the posts changes but the tangible pagination buttons remains the same. As a result, clicking on any of the numbered buttons will show posts outside of the user search and filtering.

That’s the only issue there. I hope I was clear enough.

But nice job on integrating this!

Interesting. If you’re working with L&L’s pagination, I assume this behaviour occurs because L&L’s pagination is built when the query initially runs, so when you first load the page, that’s when L&L decides which content should be on each page. If you then try modifying the query after the page has loaded, L&L has already decided what content should be displayed on the other pages so even if you try filtering the results using S&F, the results have already been queried and assigned to pages so the displayed results don’t change. This is beyond my current skill level but I know that L&L uses ajax to build its pagination, so I assume that when you double-stack ajax like you’re doing, things get messy. I’m also pretty sure that the “tangible-paginator-button” class is created when you add L&L pagination to a loop. In your screenshot, it looks like you’re using S&F to add pagination, so those classes probably don’t exist anywhere in the L&L template.

Sorry if I’m misreading the issue, maybe someone with more development experience can chime in here to suggest why this might be occurring.